Chess isn’t traditionally thought of as a glamorous or edgy pastime but in 2018, there’s no longer any need to convince the masses it’s a cool game when so many celebrities publicly endorse its play. From supermodels to rappers,  world class athletes to Oscar winning actors, this list will definitely up chess’ street cred. 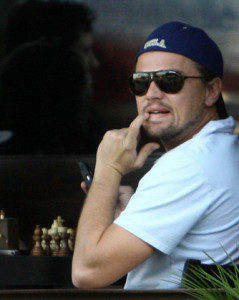 Oscar winner, Leonardo Di Caprio, often indulges in cigars and chess on a Sunday afternoon with friends. The actor was snapped playing with celebrity peers, Lukas Haas and Kevin Connolly in Beverly Hills.

Former bodybuilder and Governor of California, Schwarzenegger was a chess aficionado long before he was a Hollywood movie star. Best known for his role as the Terminator, it’s less known that Arnie played chess throughout the shooting of all the films in the Terminator franchise. Required on set from 6am – 6pm, chess kept Schwarzenegger awake and alert between takes. “There is nothing like chess to keep the brain smart and give it a workout,” he said. 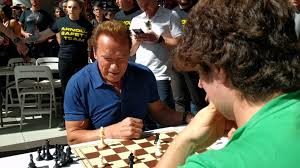 Schwarzenegger continues to turn to chess to maintain his cognitive health. Following heart surgery earlier this year, he recently posted a video on Twitter giving the public an update on his health and recovery. Seated in front of a chessboard, Schwarzenegger added, “I’m here at a chessboard playing a little bit of chess here to freshen my mind and my memory”. Here’s hoping the beloved actor returns to full health soon and enjoys many more years of play. 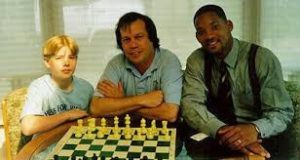 Just like Crobs’ founder Chris, actor Will Smith’s father taught him how to play when he was just seven years old. Many of the philosophies the ‘Fresh Prince’ lives by today is a synthesis of those childhood chess lessons and the life lessons gained as an adult. According to Smith, the ability to accurately assess one’s position in chess is a skill that should be transferred to assess where one is in life.

‘Life makes its moves and those moves are then responded to, just like in a game of chess,’ Smith said. 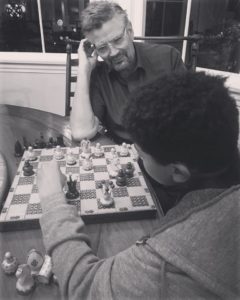 Klum’s father and son bond over the chessboard

When supermodel Klum isn’t strutting down the runway or hosting popular tv show, Project Runway, she enjoys playing a game or two with family members. Eight months ago, Klum shared a picture of her father and son playing chess together on her Facebook page and posted ‘I loved playing Chess with my dad growing up …. now he plays with my son’.

World heavyweight boxing champion, Lennox Lewis, is a gun at chess and plays daily. “I played four hours a day during training camp,” Lewis said. Despite his trainers’ constant pleas to put the chess pieces down and return to ring, Lennox sees as chess as valuable preparation for boxing. 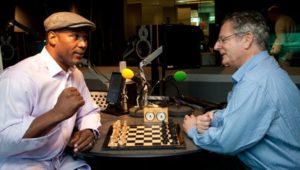 “It’s like boxing: there’s a strategy. You have to decide what move to use, or what combination of moves. I’m thinking less when I’m boxing, because the reaction time is a lot quicker, but some people call me the chess boxer because they say I think too much when I’m in the ring. I am taking my time about it and they are not seeing the action they want. Well, that is because I am thinking of the proper strategy to defeat this man. I am thinking and boxing at the same time. Some boxers just go in there and just throw punches and hope to win.”

Lewis also credits chess with getting him through growing up in the rough part of East London. “When someone calls you a name you want to punch them out… but chess teaches you to think through the next moves.” 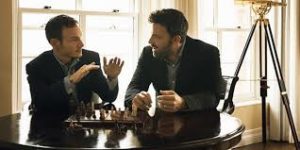 Dubbed one of Hollywood’s ‘bad boys’ due to his penchant for gambling and women; actor, director, writer and producer, Ben Affleck, enjoys playing at the Bel Air Chess Club. 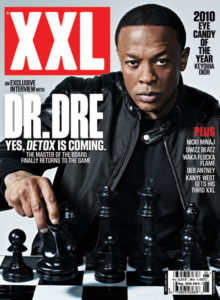 Who better to endorse chess to the Gen Ys and Millennials than Dr Dre? Rapper, music producer and entrepreneur Dre appeared on the cover of XXL magazine seated in front of a chessboard controlling the black pieces.

The Hip Hop world claims they have shown more love to chess than any other music form and the Hip Hop Chess Federation is a prime example of that. The world’s first non-profit organisation, the HHCF fuses music, chess and martial arts to promote unity and non-violence in America. Engaging cultural icons and music artists to assist them in raise interest in the cause and money for underprivileged youths, HHCF leverages their public profile to host celebrity chess events where young people can compete in chess tournaments to win education scholarships.

As a young boy, Reeves would hustle guests at his mother’s parties in Toronto. The Matrix actor would top up his pocket money by taking on challengers for a dollar a game. Reeves continued playing in his teens, where he joined his high school chess team, into adulthood, and plays on set with co-workers during filming and to relax in his downtime.

“The game drives me mad,’ Reeves says. ‘To unwind, I, you know, battle with my computer. That sounds crazy”. 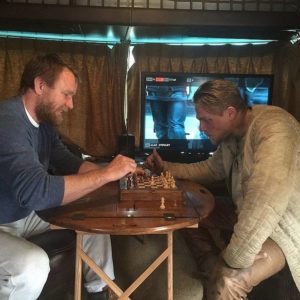 Director Richie is actually the reason this list blew out from nine to fifteen celebrities.

On the set of every movie he has directed, Ritchie has managed to browbeat, I mean charm, all his actors into playing chess with him. 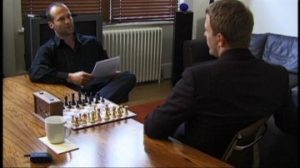 Action hero Statham is best known for playing cheeky, Machiavellian, tough guy roles in movies such as Crank, The Fate of the Furious (Fast and the Furious 8) and the Transporter franchise. Statham has starred in three of Ritchie’s films – Snatch, Revolver and Lock, Stock and Two Smoking Barrels and says he developed his gameplay on the set of the Revolver.

“I played more chess with Guy on that set than I’ve ever played in my life. He owes me a lot of money because he lost so many times. And I need it more than he does!” Statham joked.

Anyone who purchased the Snatch DVD with bonus footage, will have been amused by Statham interviewing Ritchie over a game of chess in the Making-of Snatch Featurette, complete with all the bickering and bitching you would expect between two outspoken, intelligent, irreverent but witty and charmingly like-able larrikins.

Actor Jared Harris, best known for his role on acclaimed tv show Mad Men and for playing Sherlock Holme’s nemesis in the movie Sherlock Holmes: Game of Shadowsis another actor who has fallen victim to Ritchie’s chess obsession and knows all too well how seriously he takes the game. Commenting on the chess play that took occurred during filming of Game of Shadows Harris said “see if Robert [Downey Jr] wasn’t allowed to talk, I would win, but he makes me laugh too much … we would just start chatting away. Guy Ritchie and I played, but we beat each other into a standstill. It was a fairly ugly game where we had one king each at the end and nothing else left”. 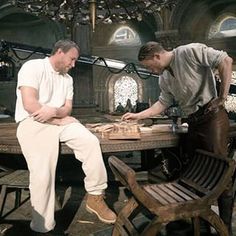 Sons of Anarchy, Pacific Rim and The Lost City of Z star, Charlie Hunnam, didn’t have a hope of escaping movie-making with Ritchie unscathed by chess. On the King Arthur set, they shared a bromance as well as a chess set whenever inclement weather halted filming. 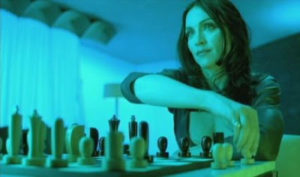 Even global pop icon Madonna had to ‘get into the groove’ with ex-husband Ritchie’s chess obsession. Tutored by Scottish chess champion Alan Norris, the singer has amassed an impressive 19,000 games in the Internet Chess Club. Though she is seen playing chess in two of her music videos, the British public didn’t consider the game cool until they realised Madonna actually played it in her daily life. The revelation instantly sent sales of chess sets skyrocketing. Supermarket giant, Tesco, revealed sales of their own-brand chess sets boomed and sold at double the rate forecast. 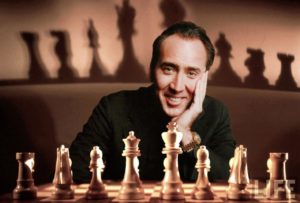 Like Madonna, actor Nicholas Cage also belongs to the Internet Chess Club but received his tutelage in Los Angeles from National Master Robert Snyder. Cage and his son Weston began lessons with Snyder all the way back in 1999. 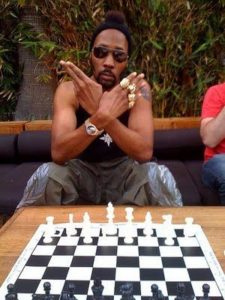 A respected and prominent figure in Hip Hop, American rapper RZA is renowned for being the unofficial leader and musical mastermind behind the legendary Wu-Tang Clan. When he’s not making music or juggling projects as an actor, author and filmmaker, you’ll find RZA in front of a chessboard contemplating life and his next move.

“I like chess because it’s a war game,” he said.

“It’s mathematical and it’s analytical, and unlike in life, if you lose in chess it doesn’t mean you’re dead. It’s a game that definitely teaches the strategies of life, where you can learn from loss. It’s also very meditative for me. A lot of people can’t learn from loss. They lose and they can’t come back, they can’t recuperate themselves and I think that’s a curse for them.”

With so many A-list celebs endorsing the game, there’s no doubt chess has been elevated from totally geeky to a totally gangster pastime.