With the holiday season upon us and summer bringing endless days of sunshine, it’s the perfect time to head outdoors, relax, and indulge in our favourite past-time. That said, where can we find a board when the urge hits?

Read on and find out, fellow chess lovers …

The Maze is a family entertainment park located on the doorstep of the iconic Swan Valley, only 45 minutes from the Perth CBD. Officially opened in 1981, The Maze was a popular place to visit for picnics as well as its major attraction – a 2500m2 timber puzzle that at the time, was the largest maze in the Southern Hemisphere. 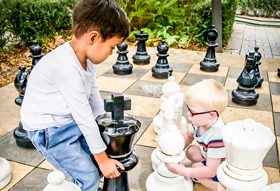 Since then many additional maze structures, activities and entertainment options have been added including a giant chess board. Measuring 3.6m x 3.6m with giant chess pieces standing 2 feet high, this adds a whole new dimension to the game.

Adapting the way you conceive the board from a 2D birds-eye overview to a large scale 3D one before having to physically exert yourself to execute your move is an experience every player should add to their chess bucket list.

So, whilst the other Maze attendees lose themselves in labyrinths, find out what it’s like to strategise in a new way against chess opponents. At the very least, you’ll enjoy the novelty factor of paying with oversized equipment. 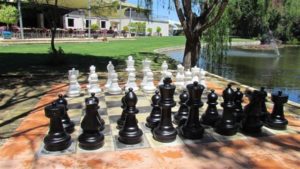 If picturesque settings inspire your play, Ramon’s is the ideal location for your next game of chess.

Located in Cannington, his venue is a real delight. Enjoy an alfresco meal surrounded by beautiful Japanese gardens before you give into temptation and head over to the outdoor chess board that beckons diners temptingly from alongside the tranquil pond feature.

If you’re a student studying at Curtin or have university friends that live on campus, the upside of this location is the opportunity to fit in a game or two between lectures. 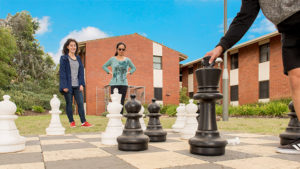 George James House is a set of modern buildings in Kurrajong Village on the south-east corner of Curtin University’s Bentley Campus that provides accomodation for its local and domestic students.

The exterior features lovely gardens, a large barbecue area, exercise equipment, a beach volleyball court, a mini golf course, a herb garden and most importantly, a giant chess set. With thousands of students attending Curtin, it shouldn’t be too hard to find an opponent.

This venue makes the list because of its multi-tasking benefits. Where else could you combine the dreaded grocery shop with a bit of chess fun? 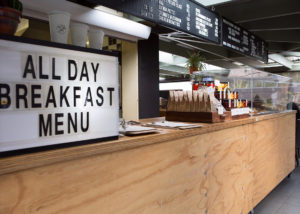 Not only can you purchase the freshest, organic and biodynamic produce from growers and producers who are passionate about ethical and sustainable farming at one of the most central locations in Perth, you can reward yourself afterwards with a well earned cuppa and game of chess or three.’ hosts social chess at the City Farm cafe every Saturday from 9.30 am – 12pm 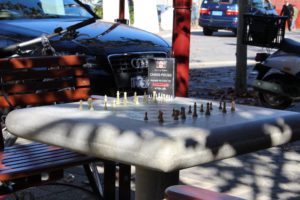 As part of the council’s minor urban intervention movement, City of Perth have installed a free public chess board / chess table on Lake St in Northbridge, near the Francis Street intersection.

Using the board is free, however it’s a good idea to bring your own chess pieces.

If you forget or don’t have any, ask to borrow some from the friendly staff at the nearby Shots café.

For the culture lovers and history buffs amongst our chess tribe, King’s Square, also known as St John’s Square, is the venue for you! 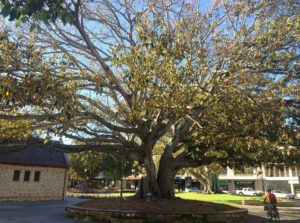 King’s Square is a paved and grassed civic square in the centre of Fremantle. It is bounded by William, Adelaide and Queen Streets and the Myer Building. King’s Square (and associated Queen’s Square) and is significant as historical evidence of the first town plan that was drawn for Fremantle in 1833 by Surveyor General J. S. Roe.

Within the square, there are six Moreton Bay Fig trees which are also highly significant as living remnants of the planting that occurred during the 1890s – the first concerted efforts made to beautify the town. 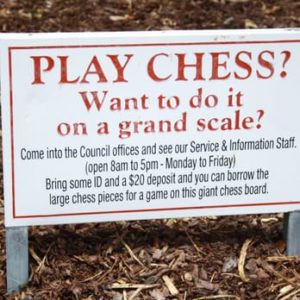 Records indicate the trees were planted by Philip Webster, auditor for the Fremantle Municipal Council and owner of Fremantle’s Esplanade Hotel in the 1860s and 1870s and have been placed on Fremantle’s Significant Tree Register by the National Trust, W.A. 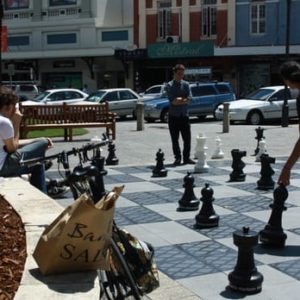 The chess pieces are kept in the council office and available to the public Monday to Friday between 8am – 5pm. To borrow them, see the Service & Information staff  with photo ID and a $20 deposit. 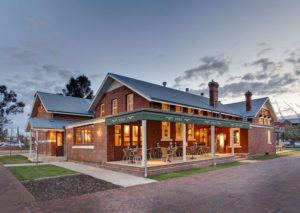 We’ve saved the best for last.

The reason this venue is the best location in Perth for chess is because it’s the home of Crobs’ regular Sunday chess meets.

Playing chess amidst the delicious aroma of ground coffee beans is the ultimate stimulation of the brain and senses in our opinion. Not to mention the great people waiting for you to challenge them!

Wherever you play this festive season, have fun, stay safe and have a very Merry Christmas and/or Happy Holidays.

May Santa bring you an array of new chess equipment, an abundance of wins, higher FIDE rankings, and if you were really good this year – a grandmaster title or two.

Until next year chess lovers!

*Disclaimer: Crobs’ Coffee & Chess is a non-profit initiative that does not seek to gain from the reproduction of the published images. The images appearing in Crobs’ blogs are solely for the purpose of positive promotion of local governments and businesses. Should copyright be an issue for the author, please contact Crobs’ Chess for immediate removal*