When Three Isn’t a Crowd

Society has conditioned us into thinking things are better in twos.

Sure, some do belong in pairs like socks, gloves, earrings and shoes but to force pair status on single items? (think sunglasses, underwear and pants) where’s the logic in that? 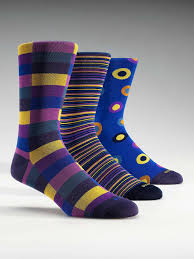 We’ll also concede that matching items that are alike or share alignment makes sense. Even essential at times, for instance in the case of allocating sparring partners in a children’s martial art class – matching size, age and gender matters. As is finding a match in ability and experience when selecting a partner for a ballroom dancing or salsa competition you want to enter but uniting like items isn’t enough to sate the human compulsion to matchmake. Apparently, things that are polar opposites of one another are matches too, like salt and pepper, black and white, fire and ice and the Australian staple, cheese and Vegemite (which is definitely a questionable match). Before you think it’s just inanimate objects that get this treatment. Hasn’t our culture been brainwashed into believing we’re not complete unless we’re part of a couple too?

What we’re getting at is that we’re so indoctrinated into thinking in twosomes that three is an anomaly. We’ve been programmed to perceive the number as imbalanced and plagued by the uneasiness of having an ‘odd one out’. The reality is a lot of great things in life come in threes. A trio of musicians, giving birth to triplets and what sportsperson would say no to a hat trick? 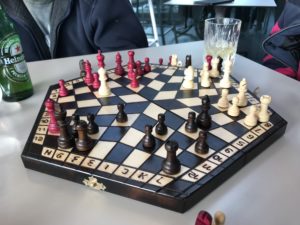 By now, you’re probably baffled as to how this all this relates to chess – especially since it’s traditionally a two-player game. Well, if you’re one of the Three Musketeers, the Three Amigos or the Three Little Pigs – it’s time to rejoice! Chess is one area where you won’t be discriminated against thanks to the invention and rise in popularity of Three-player chess.

Three-person chess (aka Three-player chess, Three-way chess or Three-handed chess) is a family of chess variants designed for, as the name suggests, three people to play simultaneously. Each person has a different coloured army of chess pieces which are maneuvered on a 96 cell, hexagonal chessboard until only one player’s king remains, giving them the win.

Three-way chess is not without its flaws. It can be a frustrating and imbalanced game when two players decide to gang up on the third, but some variants will eliminate the temptation to do this by making the first person to deliver checkmate the sole winner and the other two players equal losers irrespective of who the checkmated party was.

Listed below are two variants of this chess family and an outline of their gameplay:

Patented by a 20-year-old Robert Zubrin in 1972, now renowned for his advocacy of human exploration of Mars and his mission proposal, which was adopted by NASA; the winner of Three-player chess is the player with the last remaining king on the board. During gameplay, the pieces of an eliminated player remain on the chessboard and may be captured. However, Zubrin’s patent also suggests an alternative whereby the eliminated player’s army may be appropriated by the capturer.

Invented by George R. Dekle Sn in 196, Tri-Chess is played on a board comprised on 150 triangular cells. Each player is allocated the standard chess pieces minus the queens and each given the chancellor and cardinal compound fairy pieces. 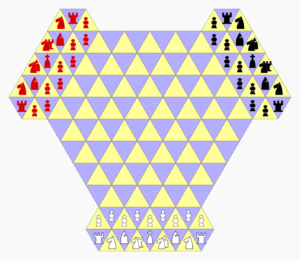 A bishop moves in the six directions that constitute the board diagonals. A rook moves in the six directions along the horizontal ranks or oblique files. A knight moves in the pattern: two steps as a bishop, then one step as a rook in an orthogonal direction. A knight can leap any intervening men. The chancellor moves as a rook and knight. The cardinal moves as a bishop and knight. The king moves: one step as a bishop or two steps as a rook. The king slides three cells whether castling “cardinal-side” or “chancellor-side”. A pawn moves and captures as a pawn, namely, straight forward one step at a time, whether crossing a cell edge or vertex. On its first move a pawn may optionally move two steps straight forward and captures to either cell adjoining the cell immediately in front, in the same rank

In Tri-Chess, gameplay begins with white moving first and play proceeds clockwise around the board. When a player has been checkmated or is stalemated, his king is removed from the board and his remaining pieces become the property of the player who delivered the checkmate/stalemate. Pawns of appropriated armies do not change their direction of movement towards promotion. The last surviving player is the winner. 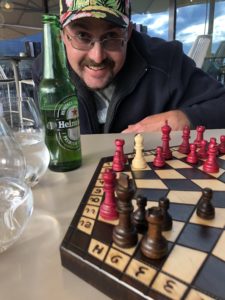 Introducing a third player into chess drastically alters gameplay, even when standard pieces are used. Obviously, chess openings are useless due to the extended board and third player. One of the greatest challenges with three-person chess is that each player must think twice as far ahead and anticipate the moves of both opponents with the added complexity that the next player may move to attack either opponent.For the variants where the third player loses as well as the checkmated person, players must focus not only on their own attack and defence, but also on preventing his/her two opponents from checkmating one another also. A player can take advantage of one opponent’s position to checkmate the other but must do so in a way that ensures the third player does not checkmate first.

Chess with three players certainly adds a new dimension to the game. If anyone is interested in trying it out, send us an email at crobschess@gmail.comor message our Facebook page and Chris will be more than happy to bring the board to one of the Crobs’ weekly chess meets and/or to arrange a private chess session on his premises or at your home (Perth metropolitan area and surrounds only).